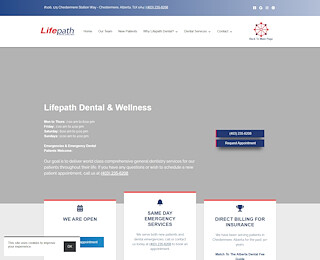 A lot of people think snoring is something they should feel embarrassed about, some others treat it as a joke. But snoring out loud, especially after a long and hectic day, can be a sign of sleep apnea (a disorder that stops and restarts your breathing repeatedly when you are sleeping).

Sleep apnea can make you feel really tired during the day, it can also have a significant effect on your mood as well as your relationship with your partner (especially when both of you sleep on the same bed). Sleep apnea can also be dangerous to your health. So this is not something to be embarrassed about or to joke with, once you start noticing the symptoms, it is recommended you seek Calgary sleep apnea treatment as soon as possible.

There are some things you can do to have a better night rest and feel more energetic and sharper during the day. The very first step you need to take is to get over how you feel about your snoring and lean to identify Calgary sleep apnea symptoms. We are here to guide you through as well as provide you with all the support you need.

Sleep apnea is a very severe sleep disorder that is very common, it briefly interrupts your breathing during sleep. If you are suffering from sleep apnea, you are likely not to be aware of the interruptions that occur when you are sleeping. But during the day, you’ll start feeling weak, you won’t be feeling as productive, mentally sharp, or energetic as you normally should.

Obstructive sleep apnea is the most common type of sleep apnea. It usually occurs when there is a blockage in the airway, resulting in loud snoring and interruption in breathing. Since this only happens when you are asleep, you might only be aware you have such an issue when your roommate or bed partner tells you about it. Calgary sleep apnea is not something that you should ignore, as it can have a huge effect on your emotional and physical health.

Sleep apnea usually causes chronic sleep deprivation that most times result in daytime slow reflexes, sleepiness, poor concentration, and increased accident risks. It can also result in irritability, moodiness, depression, and severe health conditions such as heart disease, diabetes, weight gain, and liver problems. Nevertheless, all these symptoms, as well as your snoring, can be controlled, you can have a good night rest and feel strong and refreshed during the day.

It can be very difficult to recognize sleep apnea by yourself; this is because most of the indicating signs occur when you are sleeping. But you can bypass this difficulty by recording yourself while sleeping or by asking your roommate or partner to observe you while you’re asleep. Listed below are some of the major signs and symptoms that you are suffering from sleep apnea:

Gasping, snorting, or choking while sleeping Chronic and loud snoring every night Interruptions in breathing Daytime fatigue and sleepiness, irrespective of how long you sleep.